With infection rates still high, and hundreds in Merseyside hospitals battling Covid, one critical care nurse offers an insight into how our medical teams are coping.

Dr Colin Jones has worked in nursing for 41 years and is a Senior Lecturer at the Nursing and Allied Health school at LJMU.

He returned to working on the intensive care wards last March when the pandemic hit Liverpool’s hospitals. After several years in academia, the changes brought about in the ward by Covid were a big shock.

Previously, visitations had been allowed and supporting the concerned families had been a big part of the nursing staff’s responsibilities. Under new restrictions that has been taken away to stop the spread of infection.

“I think I’ve found that the biggest challenge because the patients are very frightened and they can’t have loved ones there. They feel completely on their own which enhances their feeling of vulnerability. Nurses can give a lot of support but at the end of the day, patients want their families.”

“A lot of elderly patients, or those with dementia and alzheimer’s, aren’t able to use the technology. They see their loved ones but don’t understand why they can’t touch them and that can leave them quite distressed.”

Dr Jones admitted that seeing intensive care patients struggle with the loneliness and separation has been the biggest challenge of working on the ward.

Much of Dr Jones’ research interests lie in the PTSD that is suffered by many of those in recovery, whether recovering from injury obtained in war or patients that have been discharged from intensive care.

He believes that the pandemic has only served to exacerbate the amount of people who will suffer with psychological trauma whilst they recover and afterwards.

“Intensive care treatments can be so overwhelming and scary even before Covid. There’s all kinds of lines and drips, people are on ventilators and can’t speak, they are on drugs that make them confused, they have nightmares.

“We’re being cruel to be kind to save people so they recover in the best possible way they can, but the nature of these treatments is psychologically disturbing.”

There has been an increase in cases of mental illness during the pandemic and Dr Jones believes that support for those discharged from hospital will be crucial, even if that’s just someone who’s there to listen. 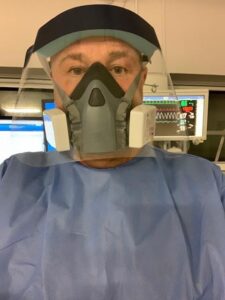 Returning to practical nursing has been made especially difficult by the introduction of PPE, which Dr Jones confessed was a big adjustment.

“I’ve never had to wear that kind of equipment before. The masks are very tight fitting and quite uncomfortable. Then you’re talking to patients and they can’t hear you, they can’t see your facial expressions and they’re terrified and you wonder how you’re going to communicate with them.”

But intensive care staff haven’t let the PPE and the pressure stop them from rallying as a team and putting on a brave face.

“There’s a really strong sense of camaraderie. Initially everything was an incredible shock with the first wave. Everyone was thinking: ‘What do we do?’ It was and is so stressful but there is always a great sense of team support.”

It has been an exhausting 12 months for healthcare staff and with no immediate end in sight, there is a sense of burnout despite their optimism.

“Staff are exhausted and that is the biggest thing. How do we manage that and support it to stop people being worn into the ground? I think that comes back to chronic underfunding in the NHS.”

Short-staffed wards, 13 hour days and seemingly endless hospital admissions has nursing teams pinning their hopes on the vaccine programme. Dr Jones said the vaccine news has brought a sense of relief and promise.

“There is a huge air of positivity about the vaccine and we welcome it with open arms. When you have it, you immediately feel better knowing you have some level of protection. If everyone has that feeling then that has to be good because it changes your psychological state.”

Dr Jones urged anyone who is invited to take up the offer of a vaccine and said that the fears shrouding it are baseless.

He said: “I think a lot of people are perceiving the Covid vaccine as being a very different clinical technique than other vaccinations but it is exactly the same as getting a flu jab.

“I think a lot of it is rooted in a general suspicion. A good way to reason it to people is to explain that it is the same as the vaccinations they have to get to go on holiday to certain places. Then it undoes a lot of people’s irrational fear.”

Despite the difficulties and stress faced by intensive care nurses during the pandemic, Dr Jones loves his profession and remains positive.

“That person was desperately sick and now look at them, they’re going home tomorrow and you’ve been a part of that. You don’t get that feeling anywhere else.”