The number of pupils in full or overcapacity Halton schools needs to be brought down, an educational expert believes.

It comes after seven schools in the borough had more pupils than places, data released by the Department of Education for the academic year 2020/2021 shows.

The schools comprised of six primary and one secondary school.

He said: “Squeezing pupils into classrooms bypasses what learning and education is.

“The richness and variety of learning cannot be achieved in this environment as everybody learns in different ways.

“It is outrageous compared to the private school sector.” 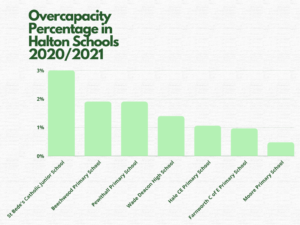 What schools are overcapacity?

St Bede’s Catholic Junior School in Widnes had 309 pupils to 300 places. This meant it was 3% overcapacity, the highest in the borough.

Wade Deacon High School in Widnes had 1597 pupils to 1575 places, with the largest amount of excess pupils.

The school was 1.3% overcapacity.

In Halton, there are 49 primary schools and eight secondary schools overall.

Dr Hammond also further explained the impact he thinks both full and overcapacity schools has on pupils.

He said: “It results in a production line-type of education and memorisation of non-contextualized knowledge.

“It’s a very disabling approach to knowledge. Any type of creative learning just can’t succeed in that environment.”

One parent, whose child attends Wade Deacon High School, said her son noticed how busy his classes are.

She said: “My lad has said to me that he feels some of his classes are really busy and he  can struggle to get attention from a teacher.

“I’ve never really raised it with the school, because it is a good school. But I don’t want him to feel like that.

“There shouldn’t be more pupils than places. It’s not right.”

What schools were at or just under capacity?

Two primary schools were at full capacity, meaning there were no spare spaces.

Overall, the figures show nationally that 17% of Primary and 22% of Secondary Schools were at or exceeding capacity. In Halton, these figures are 16% and 12.5% respectively.

Cllr Tom McInerney is the Executive Board Member for Children, Education and Social Care for Halton Borough Council.

School pupil numbers fluctuate each year for a number of factors and this is across all local authorities, he said.

Cllr McInerney said: “This includes the birth rate for the specific cohort, patterns of parental preference and in-year admission requests.

“There is also the decisions by schools who are their own admission authority, such as academy schools or voluntary-aided schools, to admit over their published admission numbers.

“This is also the case for the local authority on behalf of community or voluntary-controlled schools.”