The Penny Lane church where Paul McCartney performed in the choir as a child has been saved from closure and given a new life with big plans for the local community.

With only 20 regular attendees the Liverpool church was set to be closed and the building sold off. St Barnabas has now been renovated to operate additionally as a music gig venue and community space.

A funding bid from the Church of England and a new team, including vicar Alex Rayment, have mobilised to protect the building from disrepair and abandonment. Alex, 32, has moved up from London where he worked at HTB Church.

Speaking about his hopes for the relationship between locals and the church, Alex said:

“We want it to be a place that blesses the city and the community. It’s there for everyone rather than existing in isolation”.

Penny Lane Church was opened in 1914 and became a sanctuary during and after the war.  There are many interior memorials commemorating the lives lost. Music has always played a huge part in each congregation. The new plans for the building will prioritise that.

When planning renovations, accessibility was at the heart of every decision.

Mr Rayment said: “There’s already enough barriers that stop people from attending church – pressures in their head or socially. The last thing we need is physical barriers as well that exclude people. We wanted to make the statement to people that this is a community place. It’s yours”.

The new interior has a permanent stage, sound-desk and a ‘bar’ (serving non-alcoholic drinks). Pews have been removed to make the space adaptable to hold standing gigs. The staff are working with local musicians and are ready to hold performances in 2021 with a socially-distanced capacity of 170. 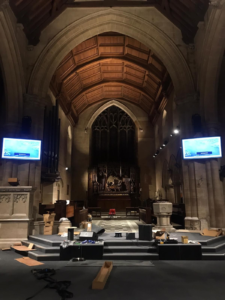 In Covid-secure times, the church aims to support local business. They plan to have restaurant pop-ups at their music events. For now they are working with charities, including Love Your Neighbour to assist in feeding the vulnerable during the pandemic.

“We began this project two years ago and who could have ever foreseen coronavirus? But now, because of it, places like this are a need as well as a want”, said Vicar Alex.

Restrictions have kept services mostly online so far but the future at Penny Lane Church looks to be action-packed and community led.