Next year is the 30th anniversary since the death of James Bulger, yet the surveillance image from the case remains etched in the minds of the millions in Merseyside and across the nation.

To those who aren’t familiar, the scene appeared harmless enough: two boys leading a toddler, one holding his hand as they make their way through a normal shopping mall in Bootle, The Strand.

Within hours of that surveillance image being captured on the afternoon of February 12, 1993, 10-year-olds Jon Venables and Robert Thompson had tortured two-year-old James Bulger to death.

In November 1993 Thompson and Venables were convicted of the murder. The details of the murder that emerged during the trial shocked many people and led to public outrage, particularly in Bootle and Liverpool.

After abducting James, the boys had walked him for two and a half miles. They were seen by 38 people, some of whom challenged them, the boys claiming that they were looking after their younger brother or that James was lost, and they were taking him to a local police station.

The boys were named by the trial judge Mr Justice Morland and sentenced to secure youth accommodation with a recommendation that they serve at least eight years in jail.

Inspector Ray Simpson, who oversaw the Merseyside police press office at the time of the Bulger investigation, spoke to students at Liverpool John Moores University about how he dealt with the media’s rising interest in the case, which is still making headlines almost three decades later. 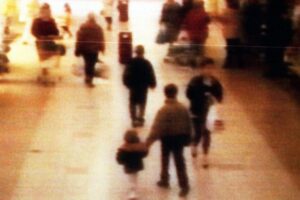 Insp Ray Simpson told Merseynewslive: “He was out shopping with his mother, and the initial report came in at quarter past four, into Marsh Lane, it was a report of a missing child, and an officer was sent out for the report.

“During that time, there were dozens of reports daily for missing children, it was just a general report and they were usually found within a couple of hours.

“In the shopping centre there were 16 security cameras, the officer that went viewed it with the staff from the Strand.

“It showed his mother standing out the shop running out looking for him, but he was nowhere to be seen. It then shows him holding the hand of one boy, it’s the picture that everybody remembers.”

“That video, every parent could relate to it”

At half past five, Radio Merseyside broadcast the incident of a missing child, and as a result several sightings had been received.

“We closed the press office at nine o’clock that night. During the evening the CID was notified about the case, and the photo department made stills from the CCTV footage with a new piece of kit they had.”

The Liverpool Echo ran the story on the Saturday afternoon with the headline ‘Find these two boys’. They printed posters and sent them out all over Liverpool showing James being lead away.

Insp Ray Simpson said: “The national press found the story and we had to try give as much information as we could. However the press office could only go home because there was nothing to give out.”

The office received hundreds and hundreds of calls at the office. The press was getting impatient.

“That’s when your investigative journalism starts, they’ll find something else or make it up.” said Insp Ray Simpson.

The international press came in and camped on the pavement outside of Marsh Lane.

There were wagons with satellite dishes. Insp Ray Simpson offered them free parking on The Strand which was close by, but they would not move.

“The international press we just didn’t have time for at this point and we made the decision to just deal with UK press even though the story was worldwide.

“We didn’t like doing this because we always liked engaging with the press. We just didn’t have the time. We had press from Australia, Japan, South America.

“I knew it reached as far as the other side of the world because my mother’s brother had rang all the way from Australia and said he had seen me on the television, it really did make it worldwide.”

Insp Ray Simpson coined the phrase that ‘the animal must be fed’.

“We had to then prioritise who we gave information to, we tried to do one press conference a day with the Senior Investigating Officer, to keep him away from answering thousands of questions so he could get on with his job.

“If you don’t give the press something you’re in real trouble.

“We held a press conference on the bar at Marsh Lane Police Conference. It wasn’t an ideal place when you’re dealing with a large amount of journalists.

“It was on the top floor so they had to walk through all the corridors and open office doors, it wasn’t a good idea. At this point all we had were updates from witnesses.”

Two days after the abduction, Diana, Ray’s co-worker, was called out to Walton Lane as there was a lot of activity on the railway line. The press had heard something had happened started to gather.

“Once the body was found, the national newspapers became really hungry for information. I remember hearing Pete Price, a local Liverpool presenter, sobbing into his microphone and just crying ‘that poor baby’.” said Insp Ray Simpson.

“You can’t upset people from Liverpool”

“The funeral upset me the most, the amount of people that were there really got to me.”

In June 2001 Thompson and Venables were released on life licence, their new names and whereabouts have been barred from being reported in England and Wales since their release. Despite countless rumours, their names have remained hidden.

“You can’t upset people from Liverpool. I think you’ve got the problem of if their identities are released, we know about one of them because he keeps committing crimes.

“If you released who they were you would have to fear for their safety because somebody out there would go and try and get them, even now. It will never go away.”

“I think the thing that made this case unique, was the video. And the fact of the age of the two boys being ten.