The Little Peacock Coffee Shop opened the doors to their ‘community hub’ on Rose Lane, Aigburth on March 1.

Seán Gleeson and Liz Wilson’s shop was previously run by Wigwam Coffee Shop, which unfortunately closed in August due to Covid-19.

After hearing about the closure, the duo decided to get in touch with the previous owners and the landlord.

Seán, a father to two said: “When it closed, we didn’t want to lose this brilliant resource.”

Liz, who also has two children added: “So many of these things aren’t here anymore which is tragic.”

Despite competition from other buyers, Seán and Liz successfully proposed to continue to build on Wigwam’s concept.

Seán and Liz became friends at a picnic through a group for new ‘mums and dads’.

Their two young children hit it off and the support group they created would often meet at previously-named Wigwam’s.

Before Wigwam closed for good, the two had already discussed how they would run the cafe but were unsure when the opportunity arose.

Seán said: “I thought, we have talked a big game, but can we actually do it?”

The Little Peacock Coffee Shop aim to build on the success of its predecessor with even more support for the community.

As well as serving breakfast and lunch, they have a sensory room and an in-house children’s hairdresser.

Future plans are to extend the opening times to accommodate after-school clubs alongside baby groups, arts and crafts.

Seán said: “Anything that people are interested in we will try and accommodate because we want to be the first port of call.”

However, they did feel a little scared given the reason the previous owners had to close.

Despite currently only being able to run as a delivery service, they say they appreciate the less-pressured opening.

“There’s been so many new mums having babies in this last year just stuck at home, it must have been utterly bleak.

“Especially for a first time mum having a baby in this climate, it must be really hard.”

The self-confessed enthusiastic amateurs have high hopes for when the world opens back up and are eager to get started. 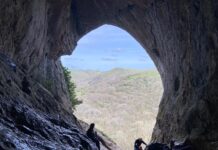